The Need for Change and Leaders to Make it Happen 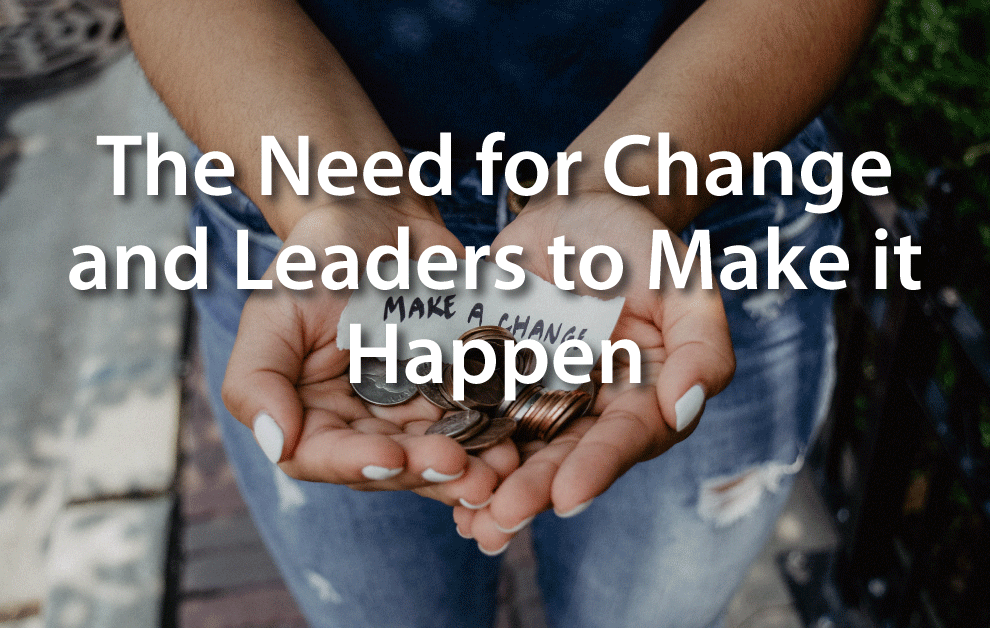 You can’t hide from it. “The only constant in life is change,” said Heraclitus (although death and taxes were added later). In fact, change is moving at an even faster rate in the digital age.

When I entered college as a freshman back in the sixties, we were given a dress code book that told us what we could wear to class, to dances, to church. The dorms were locked at curfew hour, and we were not allowed out after 10:00 p.m. on weekdays and midnight on weekends. Men were not allowed in the dorm other than at the front desk. I was a rebel and violated so many of those rules, including working in the data center from 9:00 p.m. to 6:00 a.m., wandering the campus with one of my male coworkers to find a women’s toilet (they were scarce), wearing pants when the temperature was barely above zero, and so on.

After almost one hundred years of existence, the college changed these rules completely, dropping the dress codes and curfews – the year after I graduated. That sudden!

“Change happens at the speed of trust,” as Stephen M.R. Covey so beautifully states. As humans, we have the ability to visualize, adapt, and change. If you want something different, then you have to be different. For women, seeing the need for change is part of our makeup: to be visionary, creative, collaborative – all feminine leadership qualities.

What needs to follow is trusting our ability as a leader to help make change, as well as trusting others who are involved in the journey with us. Lasting, meaningful change is definitely a group effort.

As a woman and business owner, I knew that in order to realize my vision of the future, I needed to make significant changes in how I worked. This meant going from paper-dominant to online and digital, from telephone to email and then to texts and “PM” on Facebook. With every step I’ve taken to change, either eagerly or kicking and screaming, the benefits have been worth it in terms of opening new opportunities for growth.

Perhaps there are things that you’ve said a defiant (or quiet) NO to which might be blocking your ability to affect change?

How do we tend to react and respond to change?

The following is a four-box model. The two axes are tendencies to be“people/task-oriented” and to be “fast/slow-paced.” It breaks down this way:

Do you recognize one that describes you?  Or one of your team members or coworkers? None is totally wrong or right, in fact, you could say that each in its own way helps to move the change process forward.

Knowing the style of the people with you on this journey gives you guidance on what to say, how much to say, and when to say it. You’ll know how to support them and help them move forward. Taking the right action makes changes easier to handle and faster to see happen.

How Do You Feel About Being a Leader of Change?

I notice that women have a tendency to see a change that needs to happen and because of that they step into a leadership role to make it happen. They are reluctant leaders or changemakers, but leaders all the same. However, I am sure you could be saying right now, “Nope, not me!” Well, since you can’t avoid change happening, here are some things to consider:

Once again, change is inevitable; the world is changing faster than we will ever know. And some of these changes are not for the better. Look at our water, our food, our air, our climate for some clear examples. Without changemakers, these will continue to deteriorate and make life more unbearable for us and for future generations.

Expect and manage change, rather than dreading and becoming a victim of it. If you don’t step into leadership to take on changing something about which you are passionate, you then become equivalent to the person who complains but sits back and does nothing. As Eldridge Cleaver once said, “There is no more neutrality in the world. You either have to be part of the solution, or you’re going to be part of the problem.”

Take back your personal power. Put a stake in the ground for your personal movement, the passion you have, the thing you want to change. Support it, nourish it, lead it, and allow the world to change for the better. Join others who are working on the same thing or an adjunct cause. There is strength in numbers.

Lead and create a better future than the one on the horizon, as a changemaker, as a leader.

Have the courage and fortitude to take a stand and speak out with the power of your convictions. Look at the recent movements and protests, and see the power of their conviction and the change they’ve been able to influence as a result.

As Margaret Mead so eloquently said, “Never doubt that a small group of thoughtful, committed citizens can change the world; indeed, it’s the only thing that ever has.”  How exciting it is that you and I can take our rightful leadership roles to change the world!

~ Selected from my bestselling book No One Stood Up When I Entered The Room: One Woman’s Journey from Command to True Leadership.