“I’m speaking”: Why men interrupt, talk over and ignore women in meetings 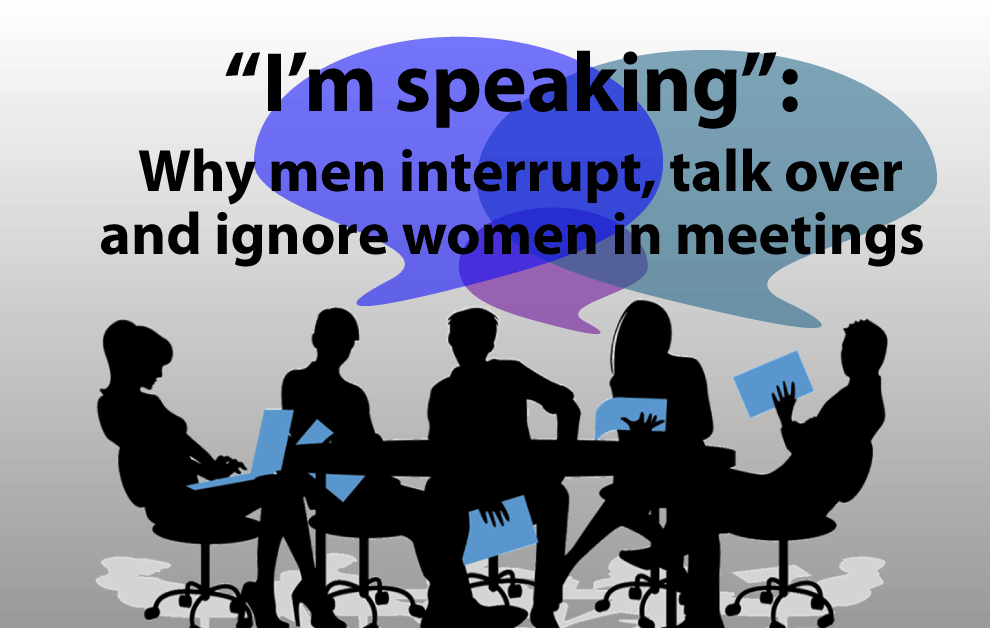 “When you increase the number of female executive members, if their speaking time isn’t restricted to a certain extent, they have difficulty finishing, which is annoying.” Do you genuinely think women talk too much? The answer, “I don’t listen to women that much lately, so I don’t know.”

This came from Yoshiro Mori, former prime minister of Japan and then-chair of the Tokyo Olympics Committee,  voiced at a February 3rd, 2021, organizing committee meeting. He was forced to resign because of these remarks.

There you have it in black and white. How many more men feel this way who haven’t expressed this belief publically?

Adam Grant, writing for the Washington Post, gives us an idea (Read the full article here).  “When people make claims about behavior in groups, my job as an organizational psychologist is to look at the evidence,” says Grant. “The pattern is clear and consistent: It’s usually men who won’t shut up. Especially powerful men.”

Here are some points of evidence he presents:

“Gender stereotypes persist,” says Grant. “People expect men to be assertive and ambitious but women to be caring and other-oriented. A man who runs his mouth and holds court is a confident expert. A woman who talks is aggressive or pushy.”

I love how Grant calls out what happens in these meetings, dubbing them “manalogues,” and journalist Jessica Bennett calls out men guilty of “talk-blocking” by naming it “manterrupting.”

At the same time, I’m saddened that these terms even have to exist at all — and that there is even a need to write about this or any form of gender bias, which I have done in my best-seller, No One Stood Up When I Entered The Room: One Woman’s Journey from Command to True Leadership. As a former military officer and corporate executive in the banking industry, I understand what it’s like to be in a meeting full of “manalogues” and struggle to be heard and respected.

The good new is that I believe this article, thoroughly and sensitively written by Adam Grant, supports the work I’m doing with Comfluential™ Leadership. It affirms my mission to empower women AND men to lead from a place of personal strength, influence and power regardless of gender identity. When we learn this leadership style model, women (and men) can feel more confident to navigate through the patriarchal leadership model and stereotypes that prevail today. They feel more confident to compete and lead on their own terms, secure in the value they bring to the table

Grant cites studies of over 100,000 leaders that showed “although men were more confident in their leadership skills, women were rated as more competent leaders by others. In evaluations from their bosses, women outscored men on 17 of 19 key leadership capabilities.”

Remember this the next time you are “manterrupted.” And consider developing a leadership mindset and style which will help you step up to be the extraordinary leader you truly are.