What It Means To Lead From The Head AND The Heart: Comfluence 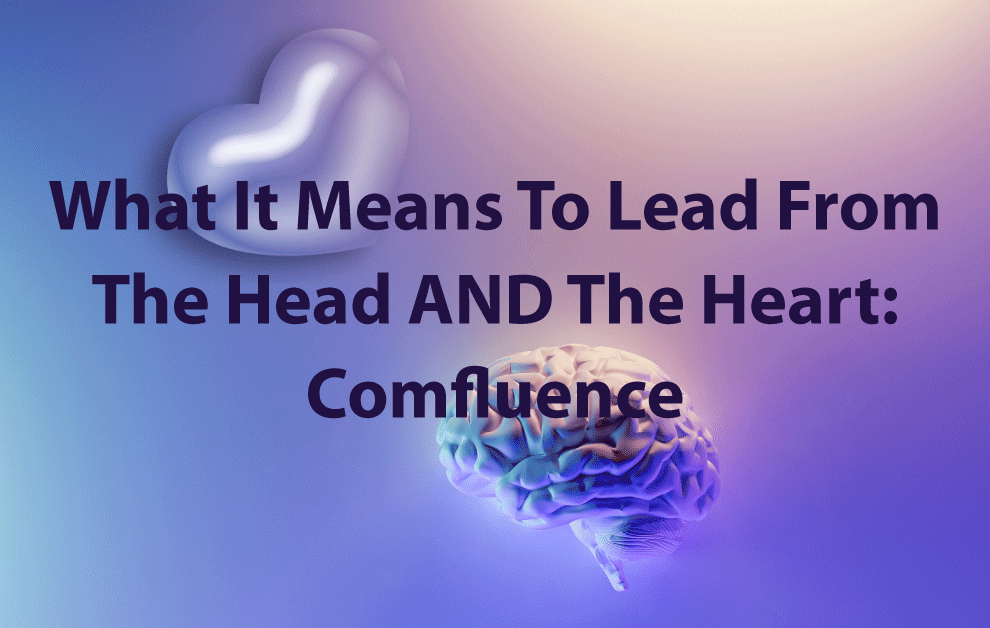 In 1970, the Vietnam War was raging. Protests continued to be coordinated across the country. My boyfriend had just been killed in a helicopter crash. I was entering the U.S. Army (specifically, the Women’s Army Corps, or WACS). I felt an overwhelming need to become an officer and to finish the work he had started.

I didn’t see myself as a leader at all (I was afraid of the idea, in fact) but I was quick to find out that you don’t get to choose in the Army — you’re “volunteered” and you say Yes Sir!

I was thrust into leadership to become the executive officer of a basic training company in Alabama. In addition, the commander at WAC Center decided that I would be a great parade adjutant. That meant I got to stand on a huge parade field giving commands to  2300 women. I soon learned to throw my voice across that field so that every one of them heard it.

When I issued a command, each one of those 2300 women moved immediately. I’d be filled with wonder and awe every time watching those women move as one at the sound of my voice. I knew in my body and my head how to lead and to do it with power, strength, and authority.

Telling others what to do is the mode of command. It is based in the head where organization, structure, and strategy live. There was no room for feelings in this person’s army.

When I left the active military, I moved into a career in insurance and banking eventually to become a Vice President of Training.

I felt right at home in the corporate world, which also followed the leadership model of command. I knew this way of leading; it was simple to fit in because command was what I had experienced and perfected. It didn’t feel unusual for me to be the only woman in the conference room (however, it was rarely easy). I met very few women in senior management positions and, just like me, their leadership style was to emulate their male counterparts by using command.

I told my people what to do, how to do it, and when the deadline was. Because we were in corporate, they mostly just “did it” and more often than not without thought. Because my department always had the projects done on time and on budget and our customer service evaluations were at the top of the charts, I thought I was a good leader.

I believed that my staff was just waiting for that next position to leave as soon as they could because my leadership had given them the experience and confidence to take that next job. I was to find out that, while this was true, they were also running from me and my commands.

Because of a company buyout, I left corporate to find a different path. With strong determination — I felt like a pioneer in a whole new world — I started my own multi-association management, event planning and training company. This pivot away from command would change my leadership style and my life.

I would learn that, while command has its place, it doesn’t always work in the world of the entrepreneur. Influence is the way to lead people. Influence is the creativity, the collaboration, the cooperation, the community, the vision, and the emotion that doesn’t “command” people to follow you; it motivates and compels them toward common vision, which is a more sustainable (and of course satisfying) relationship to have with your people.

This meant that I had to get in touch with my feelings to begin to use the aspects of influence more easily. I had to move my leadership approach from my head to my heart. At first I swung that pendulum 180 degrees because I didn’t know there might be a middle ground.

I got to know my people really well and wanted to be their friend. They wanted to know about me and I shared (way too much as a leader) so we became peers. I loved knowing all about them —  their visions, their desires, and their passions.

But what happened when I, as the leader, had to have those inevitable difficult conversations with my people? How did I tell them that they weren’t doing the job that needed to be done? How could I not say yes when they would come in and say, “Hey I can’t get this done. Could you do it?” Of course I took it on because that’s who I was.

So, apparently influence wasn’t working out for me either. I was becoming very frustrated, angry, and confused. My people were running amok no matter whether I used command or influence. I was ready to throw in the towel and just quit being a leader!

What followed was a fair amount of introspection, intense study of leadership and extraordinary leaders, and exploring the question: What is the perfect model for leadership?

Leadership guru John Maxwell says “Leadership is influence, nothing more, nothing less.”  And I disagree. Influence is important but a good leader has to have the command piece as well, in order to balance that feminine side.

I deeply believe a balance is needed which represents both the feminine and masculine strengths and positive characteristics. If we truly want to make a change in this world we must embrace a significant change in how we lead. It will take nothing less than a transformational shift in perspective on what effective leadership truly is.