What’s Merit Got to Do with It? 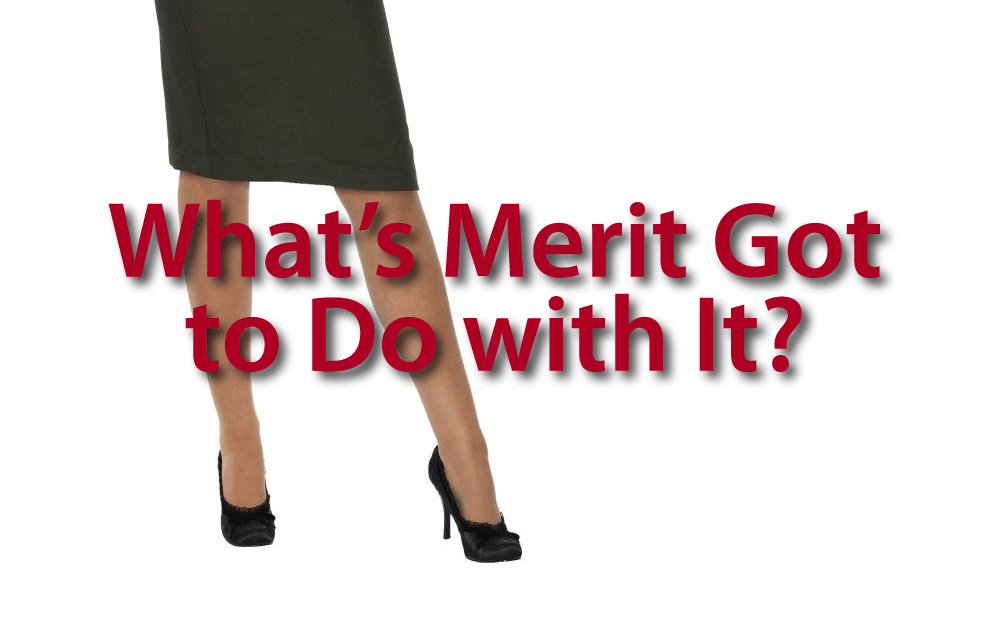 My career began in the military. One might think I was positioned to be a fearless leader right from the start. I had a strong mother who counseled me about choosing a direction that would wield more power and control and a father who’d served with the Marines. I was a high achiever, I had studied the great generals in World War II, and thought I understood what it took.

Being a Woman in the Man’s Army

Well, it wasn’t that easy. To be honest, I was afraid that I would not be good enough to be a military leader, especially when it came to leading men. What also became really evident, really quickly, was that the Army was the origin and bastion of the masculine leadership model, and a woman was not easily invited into that world.

It was indeed a ‘man’s army’ and we were reminded of this the moment we put on our uniforms and every day thereafter. For example, we were not allowed to marry or have children, and we had to hold ourselves to a higher standard than men to be accepted for the same responsibilities.

We were expected to be more put-together. We were to follow the physical training manual designed for women, entitled You Must Be Fit, which was intended to bring women to top physical standards; it also concluded with The Army Way to Health and Added Attractiveness with advice on skincare, makeup, and hairstyles (I kid you not!). While men only had to ‘break starch’ on their fatigues, we women had to iron every wrinkle out of our uniforms. Everywhere I went an iron followed me!

And then there was the sergeant who actually told me he would walk around the block to avoid saluting a woman officer.

What’s Merit Got to Do with It?

Nonetheless, I believed that if I worked hard, honestly, and with integrity, the system would reward me. This was what I had learned from my parents, and what I had done through school, excelling academically and in competitive swimming in particular. Entering adulthood, I thought it would be no different. I had faith that whatever I earned would be the result of merit. Well, I was in for a sobering reality check!

The year was 1973 and I was recommended along with twenty other top-rated Lieutenants for the job of Protocol Officer with the Commander (a four-star General) of the Training and Doctrine Command at Ft Monroe VA. We were chosen among the best and the brightest of the Lieutenants stationed at Ft McClellan AL.  It then came down to the top two – another woman and me. I went into the final interview secure in my ability and believing I was sure to be selected due to my merit. I felt confident as I stood at attention before the Chief of the General Staff, the man who would make the final choice.

And so it happened. I was the one selected to take this prestigious position! You can imagine how I felt – proud, excited about the recognition, eager to jump into this new experience and do my very best. Yet my mind still asked me, did they really choose the best? Shouldn’t it have been the other Lieutenant?

There was a lot of pressure to be perfect or there would not be another WAC in a position of this stature. My predecessors had been reassigned as one got pregnant at a time when that meant instant discharge, and the second had the audacity to put the only umbrella she had over her head and not the foreign dignitary’s head when a sudden rain shower began. Needless to say, he was soaking wet when they finally got to their briefing. He was not happy. When asked by her boss why she broke protocol, she noted that a new hat would cost her $200; instead, her mistake cost her job and career.

I was told that I was the WAC’s last hope for having a woman in this position. I had to be perfect for my own career and for the Corps.

Had the Chief of the General Staff not been throwing back a fair amount of drinks at a party a few months later, I never would have found out the truth.  He loosened up enough to decide to tell me the real reason why he had selected me for the job. Why was I chosen over twenty capable applicants? Was it my education, my military bearing, my sense of humor, my answers to the interview questions?

No, the key differentiator was (are you ready for this?) my legs.

“That was what did it for me!” he said, quite matter-of-factly. I was blown away!! Was my worth based solely on the definition of my calf muscles? And, of course, the next question that immediately crossed my mind was: if I were male, would that criteria have ever been considered?

You can imagine what this did to me. I was now faced with a choice that would have a huge impact on my future: I could fold up like a wilted flower, go through my days as if I didn’t deserve this position, and never summon up the confidence around my boss and coworkers to be all I could be. Or … I could decide that I was not going to be a disappointment to myself, to the job, or to my corps.

Yes, I regretted that it was my legs that got me the job. But I wasn’t going to be less of me because of it, so I set out to be the best damn Protocol Officer they had ever seen!

You know the Kelly Clarkson song “What Doesn’t Kill You Makes You Stronger?” That was me and the path I chose. I have never regretted that decision, and appreciate the lesson I learned:  That no matter the odds (or gender), we have the choice to either stand out or stand down.

Have you been in a situation when you’ve had to choose? I’d love to hear about your experience – share your story in the comments!

~ Selected from my bestselling book No One Stood Up When I Entered The Room: One Woman’s Journey from Command to True Leadership.