The Power of Water: A Leadership Metaphor 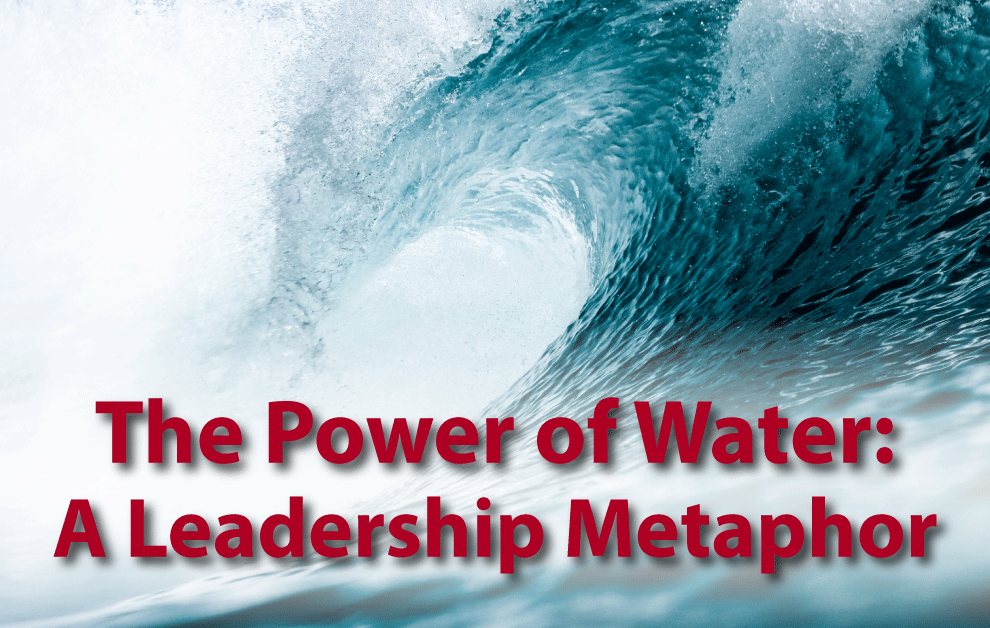 When I am in Maui on vacation, I get mesmerized watching the waves crash on the beach, over and over  – each time an awe-inspiring moment. I watch the waves race toward the beach and gather a head of steam before crashing on the sand. There is such power in that simple movement.

While there is a special kind of excitement about being able to be on the wave and ride its power, the waves can also become overwhelming and overpowering. I have watched surfers get overcome by a wave and “wipe out.”  It is not a pretty sight to see and sometimes causes injury.

One day my husband, Clark, wanted to feed the fish and snorkel the waters off Black Rock.  It is a great place to see rays and other brightly colored tropical fish. He is an accomplished scuba diver and generally has no trouble with the strength of the water.  This day, it was not the case.  Fins on, he tried to back into the water as he had so many times before.  The waves ran right over him. It almost looked like they were playing a game with him and rolled him around as though he were a toy for their pleasure. They were relentless; Clark was helpless. Standing near him to offer whatever feeble support I could, I finally was able to grab his gear as someone else rushed over to grab him. As we all retreated to the beach, I could have sworn the waves were laughing…

Here’s the metaphor:  It would be easy for a leader to become arrogant and power hungry in your leadership, especially if you are in a command mode.  You brook no resistance and run right over your followers. You know what is right and needs to be done – “Don’t get in my way!!”

Let me ask you this question: Is this the type of power and leadership you want to be known for?

How soon are your followers going to get out of the water and abandon the vision? Think about the waves when they become too bold and powerful and no one is in the water to play with them.  It can get very lonely.

As a leader of a movement, I know I want to show my strength and power, and yet not overwhelm the people working with me on the movement.   I want them along for the long run; I want them to join and help shape the vision of the movement – willingly!  I encourage them to bring their own power and strengths to make the change we’ve come together to make, not just to follow me. Leadership is more about influence than it is command.

Author Beth Revis expresses it well: “Power isn’t control at all – power is strength, and giving that strength to others. A leader isn’t someone who forces others to make [him/her] stronger; a leader is someone willing to give [his/her] strength to others that they may have the strength to stand on their own.”

If you are nodding your head “yes” and want to know more about how to be strong and powerful without being overbearing, then let’s schedule a conversation.