Women Leaders and the “B” word 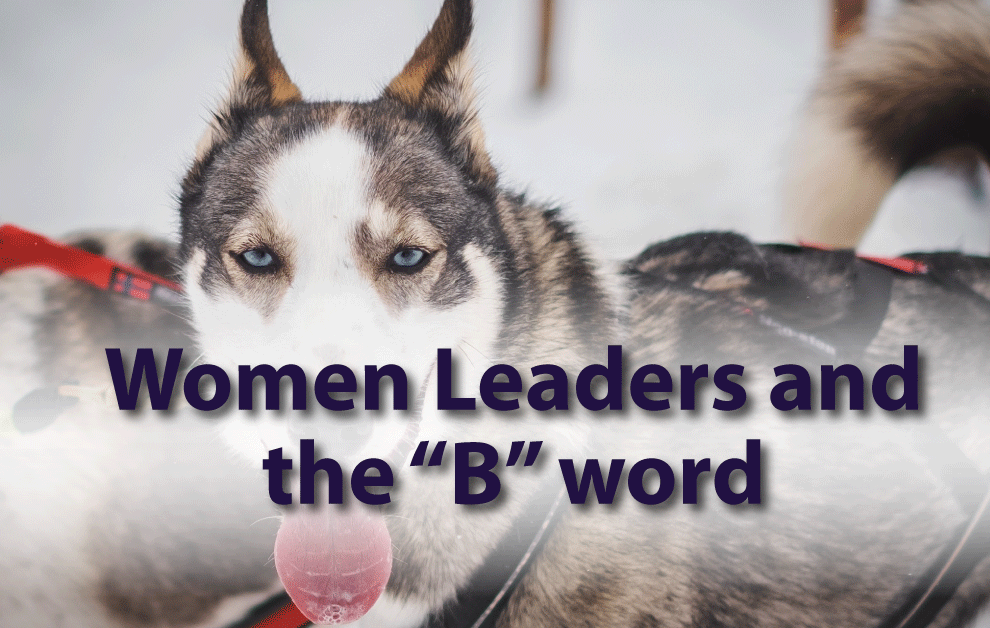 Have you ever had a woman boss – or been the boss – that people called a “bitch” because she was too aggressive, too competitive, too demanding, too cold?

When I speak in front of groups, I often start by asking them, “What comes to mind when I say the word ‘leader’? What traits does this leader have?”

Invariably, attendees report back that they pictured a man in a suit, and traits came to mind like rational, assertive, commanding, in control of ‘his’ emotions. They are representing the stereotypical, “acceptable” masculine model of leadership.

We – let’s call us ‘seasoned’ – women took on this acceptable model because that’s what we pictured too. We learned to use our mind over our heart, process over vision, telling rather than asking, competing not collaborating, being assertive bordering on aggressive.

However, when we exhibited these traits we didn’t fit the picture men (and many women) had of what ‘feminine’ is, so we became “That Boss!” (or the other name) – the woman who was disliked by men because she didn’t fit the image they expected and by women because she appeared to have gone to the “dark side.”

As more and more women step into true leadership roles in corporate, government and especially as entrepreneurs, it is necessary that we heal the split between the masculine and feminine sides of leadership. While neither one of these models is the wrong way to lead, they are just not complete.

They are two parts of a whole. This means we need to heal the rift between them to become  truly influential leaders.

The most successful leaders – male and female – find a balance between the masculine and feminine qualities of leadership. They learn to marry the two sides of being human, really.

More good news: According to JPMorgan’s report, “What data can tell us about finding the best leaders,” it is absolutely essential for a strong leader to be honest, compassionate, decisive, innovative, and to have emotional intelligence. “Women have demonstrated many times over that they excel when it comes to leading in the workplace. They are ready to ascend the ranks in greater numbers. Let data – which indicates strong leadership potential for both men and women – speak for itself in hiring and retention decisions. Knowing that both women and men are equipped with the skills to lead.”

Are you surprised? No, neither am I!

But this doesn’t mean that every woman looking to build a business or a movement has leadership skills that come from a place of wholeness.

It’s a worthy exploration – the result is an empowered, influential, fully-expressed YOU!